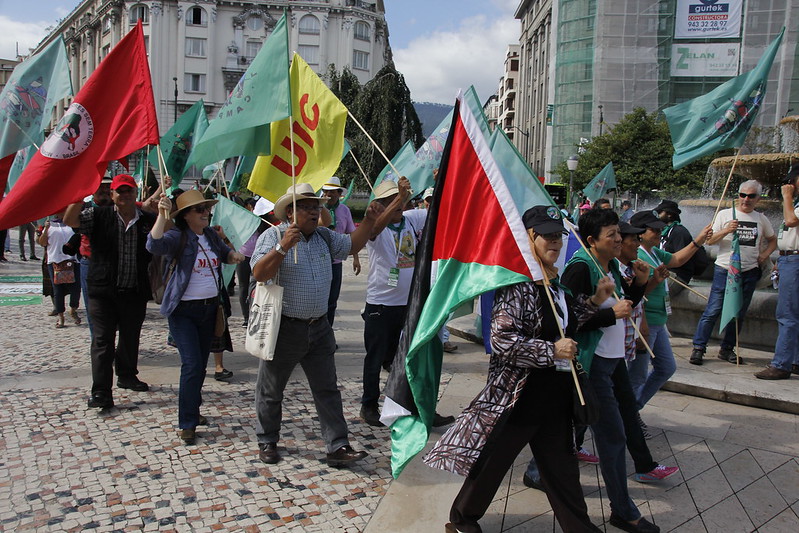 “Putting a stop to capitalist barbarism is the central task of our time.”

As experts and research continue to make the case for overhauling humanity’s destructive relationship with nature, La Via Campesina—a global movement of peasants, farmers, landless people, rural women and youth, Indigenous individuals, migrants, and agricultural workers—echoed that message on Wednesday.

“The solution is in the rebuilding of the relationship between human beings and nature, where life, collective well-being, and ecological rhythms—not greed and profit—guide the actions of nations and peoples.”
—Manifesto

The movement, which was founded nearly three decades ago and is made up of scores of groups in over 80 countries across Africa, Asia, Europe, and the Americas that collectively represent millions of people, released an “Anti-Imperialist Manifesto in Defense of the Environment” ahead of global actions planned for Saturday.

“Putting a stop to capitalist barbarism is the central task of our time,” the manifesto declares. “We need to put an end to the domination of capital over life in order to create a world that is just, egalitarian, and vibrant, so that we all can live well and in peace.”

Backed by scientific findings on the climate and biodiversity crises, the movement takes aim at “the destructive power of the current stage of capitalism,” highlighting how “the unrestrained extraction and exploitation of natural resources for profit by the large corporations, and the logic of the capitalist system, have depleted our planet.”

As the manifesto explains, “we are experiencing the worst environmental crisis in the history of humanity,” and that it will only get worse absent global intervention:

Climate change is already affecting people’s lives all across the world, and this is not the only consequence of the environmental crisis. The world’s water is contaminated by plastics and pesticides and the springs are drying up. We are also seeing dramatic rates of extinction of the planet’s biodiversity as well as large scale biopiracy—where commercial interests patent naturally occurring biochemical or genetic material imposing limits on how they can be used even in their naturally occurring environments. The soil is being degraded by deforestation and monocropping, and large regions are being completely destroyed by large-scale mining.

“The Covid-19 pandemic is the latest manifestation of this environmental and systemic crisis,” the manifesto notes.

Since the ongoing coronavirus outbreak started, public health experts and world leaders have repeatedly called for developing, in the words of famed conservationist Jane Goodall, “a new mindset for our survival” to prevent future pandemics.

However, human exploitation of nature continues, despite the pandemic’s significant death toll and economic fallout, and the clear threats of business as usual.

The manifesto—published in English, Spanish, and French—slams imperialists of the Global North, including and especially the United States, for continuing to “attack peripheral countries looking to privatize common goods that the people, the real owners of natural resources, used to take care of in each country.”

“It is important also to highlight the nefarious role that military activities play in the destruction of the planet,” the manifesto says. “In addition to carrying our constant attacks on the lives of the people themselves, the USA military, with its allies, is one of the biggest contaminators in the world, though its toxic legacy of depleted uranium, and its use of oil, fuel for airplanes, pesticides, and defoliants like Agent Orange and lead.”

The movement also blasts transnational companies for advancing a planet-wrecking agricultural model based on monocrops and pesticide use and, more broadly, for increasing “their capacity to exploit common goods, pushing forward in mining projects, deforestation, and the private appropriation of water among other things.

“In addition to carrying our constant attacks on the lives of the people themselves, the USA military, with its allies, is one of the biggest contaminators in the world, though its toxic legacy of depleted uranium, and its use of oil, fuel for airplanes, pesticides, and defoliants like Agent Orange and lead.”

“Some corporations, instead of combating the causes of planetary destruction, focus on green capitalism, converting natural resources into commodities and new areas for market speculation, like carbon credits, environmental preservation credits, and other false solutions that will not resolve the social and ecological needs of the people,” the movement points out.

“This path will inevitably lead to the destruction of humanity and of nature as we know it,” the manifesto says. “It is a project of death, domination, and destruction.”

“The solution is in the rebuilding of the relationship between human beings and nature, where life, collective well-being, and ecological rhythms—not greed and profit—guide the actions of nations and peoples,” it asserts.

According to La Via Campesina, “It is a solution focused on agroecological production of food; the democratization of the access to land through agrarian reform; the protection and care of common goods such as water, biodiversity and land; and the transition to an energy model that responds to the real needs of the working class with social and environmental justice, overcoming patriarchy and racism.

People across the globe are planned actions for June 5, World Environment Day, to demand the protection of Mother Earth and the “full implementation” of the United Nations Declaration on the Rights of Peasants and Other People Working in Rural Areas (UNDROP), La Via Campesina said Wednesday in a statement about the upcoming #InDefenseOfThePlanet actions.

“We must also urgently unite against the forthcoming corporate-led U.N. Food System Summit,” the statement noted, “as it promotes false solutions which will not only worsen the current climate and environmental crisis but will also constitute a serious attack to our rights as peasants, Indigenous communities, women, migrants, and rural communities.”

Jessica Corbett is a staff writer for Common Dreams.