The best selling French economist Thomas Piketty has documented in well researched detail how inequality is increasing in the world today. His solution? A global wealth tax on the rich. But is that enough to create a more just and equitable economy? In this podcast, Roar Bjonnes suggests that tax reforms are not enough and that what we need instead is economic systems change through economic democracy.

Shopping locally, growing some of our own fruits and vegetables, these are all very important habits to cultivate if we want to create deeper systems change. But individual changes are not enough in order to stem the tide of economic destruction against nature and the local economy. In this podcast, Roar Bjonnes outlines the eight design principles we need to implement a truly local economy.

Beyond Green Capitalism: Economic Systems Change for the Next Seven Generations

Corporate capitalism is addicted to making money and therefore has a very short planning cycle–hardly longer than its next quarterly profit fix. A truly green, regenerative economy will have to plan long term. To do that, we need deeper economic changes. In this episode, Roar Bjonnes talks about the two most important systems changes needed to create an eco-economy of the future. 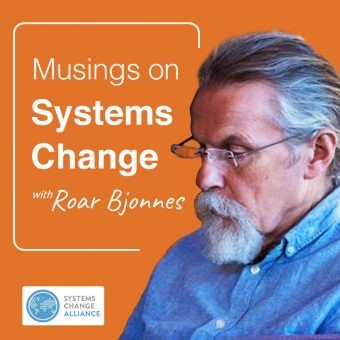 In this new Musings on Systems Change podcast, Roar Bjonnes asks if the popular Triple Bottom Line slogan of green capitalism–Profit, People, Planet–which has been adopted by companies such as Shell, is really enough in creating systems change in economics.

Learning from human history. Not all peoples and cultures from the past were environmentalists. What can we learn from their mistakes?

Is sustainable capitalism just another green mean machine or does it hold the promise of a new economy? Can we solve our environmental problems by producing and buying green products?

Is making capitalism more green a practical strategy? How can an economy built on greed create global economic justice and ecological balance?