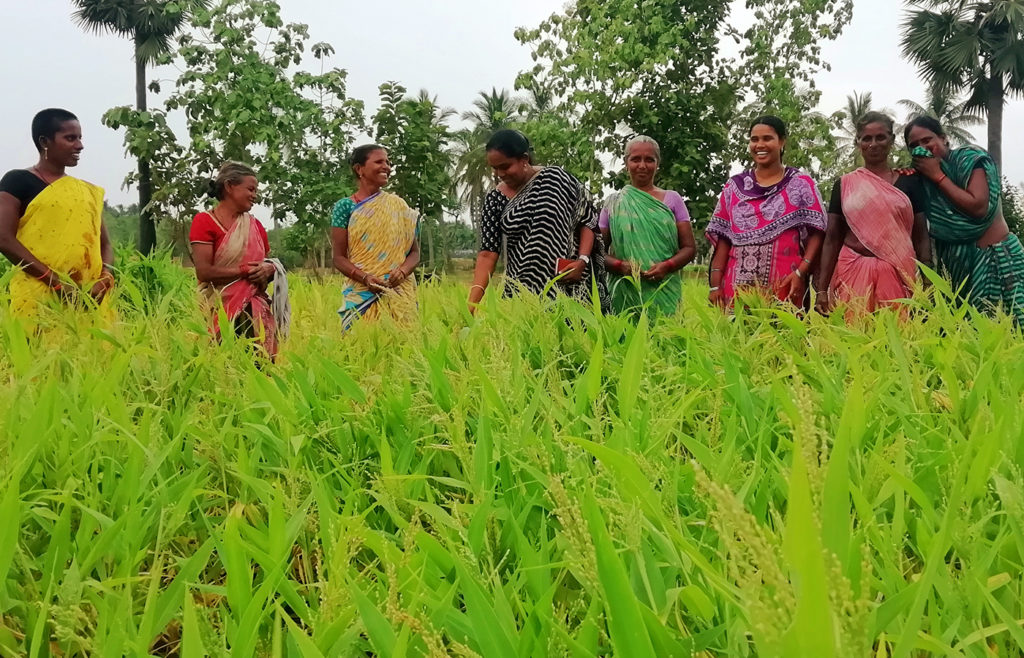 “Many people here were disconnected from their fields. They would work in nearby towns as daily-wage labor and depended on the public distribution system for subsidized but nutrient-sparse white rice,” says K. Saraswathi, executive secretary of SABALA, a nonprofit that aims to strengthen community food security via millet farming, describing the scene she encountered when her organization first began working in the district. “A few farmers who were growing rice had lost their entire crop due to the absence of rain. People sorely felt the lack of food and livelihood security.”

Similar narratives are common even today in other parts of the country, where farmers have either stopped farming completely or focus on cash crops such as cotton, sugarcane, and tobacco, leaving them with little nutrition or financial security. Rice and wheat cultivation were heavily promoted during the country’s Green Revolution in the 1960s, when farmers were given incentives for using hybrid seeds and chemical fertilizers and pesticides. As a result, the production and consumption of millets in India fell dramatically. But with nearly 60% of the country’s agricultural area under rain-fed (non-irrigated) farming, rice and wheat farmers are overly reliant on weather conditions that are becoming less conducive to farming with climate change.

Vizianagaram district is one of several places in India experiencing the revival of millet cultivation. When SABALA first approached villagers in the district about millet farming back in 2006, the women came forward because they and their children were suffering from anemia, stunted growth, and other disorders caused by the lack of proper nutrition. Today, SABALA works with nearly 2,000 female farmers in the district who are cultivating millets, mainly for their own consumption.

Janaki Bobbili, a 29-year-old married mother of two, is one of them. She belongs to the marginalized “backward class” community in the Veerabhadrapuram village of the Vizianagaram district. In the past, she felt disadvantaged not only because of her gender but also because she belonged to the lowest tiers of caste and class.

Slowly, though, that feeling began to change after Bobbili attended a meeting organized by SABALA about five years ago, where she was introduced to the nutritive value of millets. Soon after, Bobbili began cultivating millets for her family’s sustenance on a 1-acre plot belonging to her father-in-law. Thanks to millet farming, she has become a leader in a local millet cooperative and says, “I finally have recognition in society.”

The Bounty of Millets

Millets are a family of hardy, nutrient-rich grains in the grass family that have been grown and consumed in the Indian subcontinent since ancient times. Common varieties include pearl, foxtail, finger, barnyard, kodo, and little millet. In the face of climate change, millets are now being increasingly valued for their low water requirements during cultivation and tolerance to temperature increases, as well as for the unprocessed grain’s ability to store well for 20 to 30 years. In India, where more than 70% of rural working women are farmers and will be among the first to suffer the impacts of climatic changes here, millet farming helps them secure nutrition, health, and a more resilient future for themselves and their families.

Millets today, as in the distant past, are cultivated using sustainable agriculture practices such as multi-cropping, with cow or buffalo dung as fertilizer and natural pesticides called “insect-chasers” made from neem and other local medicinal plants. These traditional farming techniques enable a farmer to cultivate 15 to 20 crops in a 1-acre plot. With SABALA’S support, women in Vizianagaram district began growing different kinds of millets, intercropped with vegetables, legumes, pulses, and oil seeds.

“The investment needed to start growing millets is low, but they provide every possible kind of security. Besides food, nutrition, and health security, they also ensure financial, fodder, seed, soil, environment, and cultural security,” Saraswathi says. “Such is the beauty of millets.”

Bolstered by their success with millet farming, nearly 300 women farmers affiliated with SABALA came together in 2017, contributed 1,000 Indian rupees (about US $15) each, and started a cooperative called Arogya. Arogya is a Sanskrit word meaning “all-around well-being.” The organization now lists nearly 1,000 marginalized female farmers of Vizianagaram district as members, including Bobbili, who is the leader of the group’s production subcommittee.

Arogya buys surplus millets from the female farmers of the district, processes them using efficient machines, and sells the processed grain in the cooperative’s store. The store is located centrally in the district and caters to needs of the local community. Profitable since its first year of operation, Arogya reinvests its profits in training its members to make value-added millet products such as ready-to-eat fried snacks and baked goods as well as pre-made mixes for hot meals, which it also sells in its store. To ensure consistent business, Arogya secures long-term supply contracts from schools and hostels in the district.

During the current pandemic, the cooperative has been actively supporting local relief efforts. “We sold 1 ton of our nutritious finger millet cookies to a nonprofit at a nominal price,” Bobbili says. The local nonprofit then distributed the millet cookies to impoverished children for free, to improve their nutrition and boost their immunity.

“Owning their labor and having the freedom to make decisions are opportunities rarely afforded to these women,” says Shiney Varghese, senior policy analyst at the Institute for Agriculture and Trade Policy in Minneapolis, who has visited several millet farming projects in India. “Millet farming is a way for them to grow food crops of their choice for themselves and their families. It enhances their livelihood options, instills confidence in them, and earns them the respect of their family and community.”

Arogya is now an income source both for farmers who sell their surplus millet to the organization as well as those who are involved with making the value-added products. With the extra income, some women have gone on to buy a cow or a buffalo, which provides them with both milk and manure.

“Previously common spaces like temples and public offices were accessible only to men. Now, women come forward and are visible everywhere. They are raising their voices and fighting for their rights,” Saraswathi of SABALA says. “In most of our farmer households, the husband will first consult the wife on important matters.”

Sandhya Rani Garu, a soil scientist at Vizianagaram’s Agricultural Research Station, echoes Saraswathi’s comments. She says, “When I first began working in the district in 2014, the women were so shy they wouldn’t even come out of their houses. Now they travel about 100 kilometers [62 miles] from their villages to participate in our training programs and farmer festivals. They are financially independent and able to support their children’s education.”

The revival of millet farming in Vizianagaram district has had its challenges. There was a lack of seed availability in the initial years, resolved in due course by developing a community seed bank. Likewise, the difficulty in grain-processing was addressed when Arogya procured specialized machines for the task.

Still, other obstacles remain. While millet crops don’t attract insects, thanks to the multilayered coating on the grain, birds are known to destroy millet fields. And unlike cash crops or rice and wheat, to date, no insurance is available to cover damage to millet crops. Furthermore, banks have only recently warmed up to providing loans to millet farmers.

“We need more support from the authorities at every step,” Saraswathi says. “The linkages between production, processing, and consumption need to be strengthened.”

Millet farmers across India face similar challenges. Umbrella organizations such as the Millet Network of India support grassroots groups, helping to navigate these challenges and to revive millet farming in their respective locations. MINI now works with 15 partners in eight Indian states. Several women-led non-profits such as Women’s Collective in the south Indian state of Tamil Nadu and NEN Nagaland in the northeastern corner of the country are enabling female farmers to achieve food security and climate resilience via millet farming. Another platform, All India Millet Sisters has a membership of more than 10,000 women farmers from all across the country.

The grassroots push for the inclusion of millets in the National Food Security Act of 2013 led to it being added to the portfolio of grains, along with rice and wheat. Per the Act, these grains are to be provided to two-thirds of India’s households at highly subsidized rates via the public distribution system. Despite the inclusion of millets at the national level, its inclusion in state-level public distribution programs has varied across the country. Groups like MINI and AIMS continue to lobby for millets to be part of all public food schemes at the state and district level.

Some state authorities, such as those in Karnataka and Odisha, are driving the millet programs in their respective states. The renewed focus on millet production and consumption aims to help India’s small farmers and their communities become climate-resilient while enhancing agricultural biodiversity.

Varghese, who served on the High Level Panel of Experts of the U.N. Committee on Food Security from 2017 to 2019 says, “Scaling up agroecological efforts through climate resilient approaches like millet farming will go a long way in achieving local food and water security while ending hunger and malnutrition.”

Anne Pinto-Rodrigues is a journalist focusing on social and environmental issues. Her geographic specialty is India, where she was born and raised. Anne has been published in The Guardian, The Telegraph, Ensia, CS Monitor, and several other international publications. She is currently based in the Netherlands, and speaks English and several Indian and European languages. She can be reached at annepintorodrigues.com.